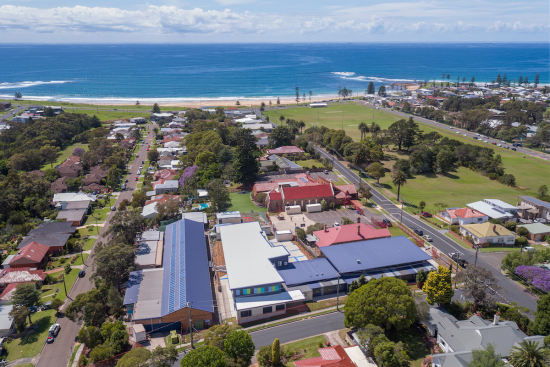 St Joseph’s acknowledges and pays respect to the traditional custodians, past and present, of this land, the Dharawal people - who long before us lived, loved and raised their children on this land.

Catholic education has a long history in the Bulli area, beginning when the Sisters of St Joseph, who began the first school in Mailbag Hollow, Bulli, in 1882. It is believed that St Mary of the Cross MacKillop visited the convent and school several times. In 1923, the school moved to the Park Road site where the old hall was used for classrooms.

As the school expanded, a two-roomed weatherboard block was built and officially opened by Bishop McCabe. In 1974, the school became a systemic Catholic school supported by the Catholic Education Office. The school today remains a part of the system of schools within Catholic Education Diocese of Wollongong.

At the end of 1985, the Sisters of St Joseph withdrew from the school after one hundred and three years of delivering Catholic education in Bulli. A plaque commemorating over one hundred years of love, dedication and service to the school is displayed in the school’s office. In 1986, renovations to the church were completed and blessed by Bishop William Murray. In the same year the Parish of Bulli celebrated its centenary. Between 2009 and 2010, a new hall, administration block and refurbishment of classrooms were completed.

The building of a new school office and six new classrooms was complete in November 2017. By April 2018, a further classroom was built and four other classrooms were refurbished along with the redevelopment of the school playgrounds, including an adventure playground.

As a parish school, grounded in the St Joseph's Catholic Parish community, it is intended that our school should be an integral and vital part of the whole parish and indeed, of the wider Church community. It is intended that the spiritual growth and welfare of the students be carefully integrated with quality Catholic education. This is a shared responsibility between the parish priest, principal, staff and parents, under the supportive supervision of both Catholic and federal and state government education authorities.

A Catholic School in the Diocese of Wollongong

Catholic schools have a long and proud history in the Australian educational landscape. Originally established by orders of brothers, nuns and priests in the nineteenth century, they are now almost entirely staffed and led by lay people.

Catholic systemic schools in the Diocese of Wollongong are either parish primary schools like St Joseph's, or diocesan secondary or K-12 schools. They are all co-educational schools. (The Diocese also has another seven independent congregational secondary schools, some of which offer single-sex education.)

Catholic schools have a unique character because as well as being places where learning is highly valued, they are places where priority is given to a values-based education in the Catholic faith. This involves all staff and students proclaiming the Good News of Jesus Christ to the world. Staff identify strongly with their school and take pride in their work and the school’s achievements.

Take a Virtual Tour of Our School